Reconciliation Committee: Will Amaechi, Abe set aside their differences?

The National leadership of the APC has constituted yet another Reconciliation Committee as part of ongoing efforts to stem the level of crisis that is rocking the party’s foundation.

The action by the APC is coming a few days after the conservatives under the umbrella of the PDP held a NEC meeting considered peaceful.

Those who apparently expected the PDP to implode were mildly surprised.

But the unity demonstrated by PDP leaders last Thursday sent signals which indicated that the infighting within its ranks and file may have been significantly curtailed.

Governor Buni, acting Chairman of the APC may have worked hard to lure members of opposite camps into the ruling party.

Insiders agree that the consummate party administrator deserves credit for his role in remolding the party after the post Oshiomhole era.

But there are signs that pockets of growing disagreements among Progressives drawn to the APC are threatening party cohesion.

Monday, Governor Buni announced that a former state governor from the North, widely respected by his associates, would take charge of APC’s peace keeping effort.

Across the country, APC leaders in Kwara, Imo, Rivers, Akwa Ibom, Bayelsa and Delta and some parts of the West where parallel congresses held are at war.

The body is expected to engage in talks with various warring groups within the  party which have rejected mediation in the past to return to the roundtable.

All efforts for instance, to reconcile the Minister of Transportation, Rt Hon Chibuike Rotimi Amaechi and Magnus Ngei Abe, a former Senator have failed.

What will happen now? Will the two combatants within the Rivers APC bury their differences?

That is the question that folks, especially members of the APC in Rivers State would be asking as the reconciliation team gets down to work.

Abe has been mercilessly elbowed out of the ward and local government congresses by the Minister of Transportation and his supporters.

But Abe and his supporters vow they are going nowhere. They insist that nobody can run the APC in Rivers State without their involvement.

It would be interesting to see what the new reconciliation committee would do to break down the ego of the two former friends.

Abe and his friends are long distance runners. It is apparent that as Amaechi and his men get into a killer mood, Abe and his team would be waiting and watching like sniffer dogs.

The people from Freedom House know a little mistake could change the tide of the cold war which exists and they may be searching for that opening to punish Amaechi.

While Abe and Amaechi flex muscles, Wike and the PDP appear to be digging in.

Somehow, Prince Uche Secondus has been eased out of the chairmanship race. 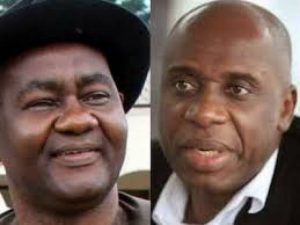 All the positions occupied by the South are now to be held by politicians from the North.

This was the position taken at NEC and it would seem that the PDP has simply decided to move on as it prepares for its National Convention.

In the interim, the South appears close to the presidential ambition that it has strenuously fought for in the last few months.

Back home in Rivers, many attribute the fight to expand the revenue sources of states, and the Battle to create access for the emergence of a true federalist state to Governor Nyesom Wike. 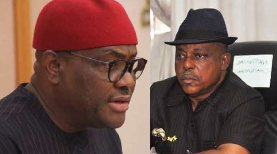 Wike is proving to be a fighter and a strategist, and among his supporters, there is a strong feeling that a new door is opening.

While events play out in the PDP, Amaechi may have a way of extricating himself from Abe’s icy grip.

Abe is not hiding his intention to claw his way through. Amaechi may he the heavier one, but Abe who are best be described as an experienced judoka knows a take down on the mat has very little to do with one’s weight.

To find peace, Amaechi may be forced to release some of the nuggets that he firmly controls.

Abe insists sharing power with Amaechi is all that matters. Until that happens, Abe is willing to get bloodied; willing to take more uppercuts that are coming from Amaechi; and willing to go the whole hug on the road to becoming a political martyr.

If Amaechi who favors a winner-takes-all posture refuses to share power with Abe, no matter how  little, reconciliation in Rivers State may prove a mission impossible.

Selection of party candidates: Why Wike is unhappy

They are psychopaths who do not represent Islam – Buhari